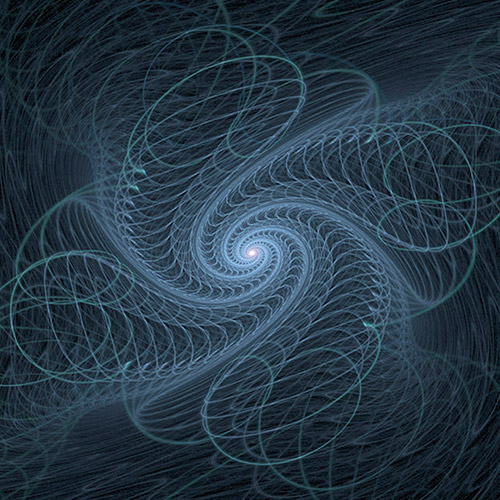 Fundación madri+d has presented the 10th edition of its Awards, consolidated as a landmark venue among the scientific, technological and innovative community within the Community of Madrid. The ceremony took place at the main offices of the Association of Architects of Madrid last April 22nd. 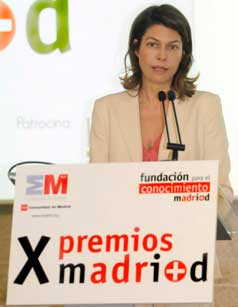 The event was opened by the Director-General of Fundación madri+d who thanked authorities and guests for their presence, congratulated the awardees, commended the judges in their task and explained the aims of each of the prize categories, and the honorable mentions granted to the IMDEA (Institutos Madrileños de Estudios Avanzados) for their collaboration with enterprises in projects that have achieved noteworthy results, suitable for launching on the market.

The Minister of Education, Youth and Sports closed the ceremony, underscoring the Community of Madrid’s leading role in scientific production nationwide, concentrating 35% of Spain’s production. Likewise, this region is the leading Autonomous Community in patent applications and concessions with one fourth of Spain’s R+D population. This shared public and private effort is the reason why investment in R+D+i in Madrid is more than half a percent point ahead of the national average: 1.74% of GDP, against a national average of 1.24%.

The organization Fundación para el Conocimiento madri+d, within the framework of the 10th edition of its Awards, has given special recognition to scientific-technological activities involving public-private cooperation with an impact on the economy of Madrid, through awarding each of the IMDEA Institutes an Honorable Mention for research projects performed in cooperation with Spanish and foreign companies and whose results have been launched commercially in recent years. 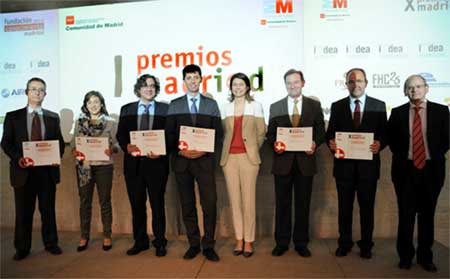 Lucía Figar de Lacalle with the heads of IMDEA

THE AWARDED CONSORTIUMS WERE THE FOLLOWING:

The consortium IMDEA Networks Institute – Factory Holding Company 25 S.L., for a project developing a commercial tool with the necessary software and algorithms to analyze big data for Factory Holding Company 25 S.L., of the Zed Group. The result was a data analysis console that allows client companies’ data to be loaded and treated from multiple viewpoints, extracting trends and identifying patterns.

The consortium IMDEA Food Institute – Grupo Frial S.A., for a project consisting in a clinical essay on nutrigenetics intervention based on administering functional meat products to women treated for breast cancer at Hospital Infanta Sofía.

The consortium IMDEA Energy Institute – Titan Tracker – SunBorne Energy Technologies, for the project CRISPTOWER (Collaborative Research Initiative in Solar Power Tower), funded by the Indian Ministry of New and Renewable Energies (MNRE), whose aim is to develop a central receptor technology for air cooled thermo-solar plants adapted to the context and industry of India.

The consortium: IMDEA Materials Institute – Airbus Operations S.L., for the project NACRE (New Aircraft Concepts Research). Airbus is planning the new generation of single-aisle aircraft to replace the A320 on short- and medium-range routes, and has been assessing new configurations within the framework of NACRE, financed by the European Union, including wings with a different geometry, turbofan and open-rotor engines mounted on the aft fuselage, and new rudder configurations.

The consortium IMDEA Nanoscience Institute – Repsol, for the SONAR project whose aim is to study a series of technological challenges grouped around six fields of applicability: batteries, reduced emissions, catalysis, photovoltaic energy, crude oil extraction, materials and sensors. For each challenge identified by Repsol, IMDEA Nanoscience has proposed a series of solutions structured on a technological chart, on which research ‘road maps’ have been traced. 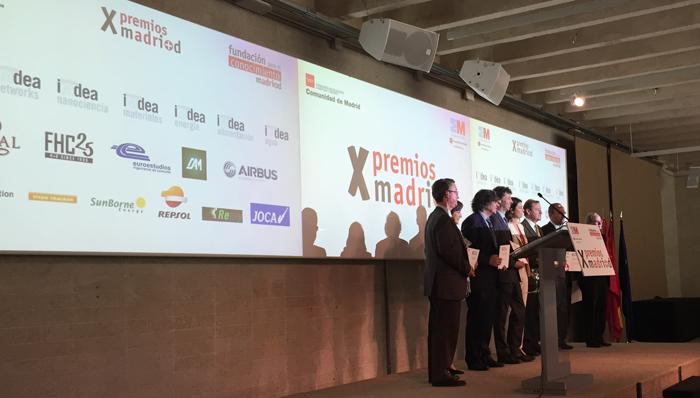 Presentation of the Honorable Mention to the IMDEA initiative

During the ceremony, the following prizes were also given:

These prizes are sponsored by PONS Patentes y Marcas.